Rob Fatal is a video, photo and performance artist concerned with the Queer archive and exploring decolonial aesthetics. Fatal has been awarded grants by the Berkeley Film Foundation, Queer Cultural Center and SOMArts Cultural Center. Fatal’s work has been screened internationally at the British Film Institute Flare Festival, Fringe! Queer Film & Art Festival in London, Rio de Janeiro Gender and Sexuality Film Festival, Frameline SF LGBTQ Film Festival, Galeria de la Raza San Francisco, Toronto Queer Film Festival, Geneva LGBT Film Festival and First Nations Film Festival in Chicago. As a Native American, Latinx and queer artist, Fatal finds community and culture to be their greatest artistic inspiration. To create with the collective minds of unique individuals is a practice that brings to them a great spiritual catharsis; a feeling of joy and power tied to the realization of what people working together can accomplish when in harmony: a home, a shared reality, justice, and healing. 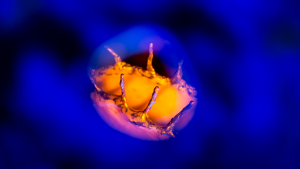 Alyssa Lempesis is an Oakland-based artist who uses strange and innovative materials to create mysterious sculptures and animations inspired by our internal and external ecosystems. Her work merges the natural and the fantastic to create animated scenes of a world that exists somewhere between the unknown and the familiar, the present and the future.

Alyssa Lempesis received an MFA from University of California at Davis (2014) and a BA at University of California at Berkeley (2012). She is an artist and educator living and working in the East Bay. Recent solo exhibitions include Aggregate Space (Oakland), Diablo Valley College (Pleasant Hill), The Building Imagination Center at CSU Stanislaus (Turlock) and Alter Space Gallery (SF) as part of the Jail Cell Residency Program. In addition, Lempesis has participated in group shows at The Lab (SF), Root Division (SF), Pro Arts Gallery (Oakland), and Gregory Kondos Gallery at Sacramento City College (Sacramento).